THE TOUR DE FRANCE AND THE CURSE OF JEMMY HOPE
Is it a myth? The jury is still out. I named Cadell Evans as the overall winner - he finished 30th. I named Saxobank as the winning team - they came in third.
I didn't go on record, though, on another opinion; that neither Bradley Wiggins nor Mark Cavendish would make it to Paris. OOPS!
I no longer believe that what I say or write has any effect on any event - some of the time anyway.
This year's tour could have been a great disappointment for the British media; no doping scandals to rejoice over. But then British riders did spectacularly well, and the British media recognised the Tour de France as "the greatest bike race in the world". Without those successes it would have remained that French nonsense.
Posted by Jemmy Hope at 3:16 pm No comments:

"Steven Gerrard cleared of Affray" (Guardian headline)
Who could have predicted that? Oh yes, everybody.

Drunken thug walks free after assault.
Millionaire leaves court without a stain on his character.

What a difference a few million quid can make.
Posted by Jemmy Hope at 8:16 pm No comments:

Now that my younger son has returned my copy of "Bringing it All Back Home", by Ian Clayton, I can post a quote from it that I like -

"In 1974, Hull, once one of the giants of rugby league, were at a very low ebb near the bottom of the league. One mucky Wednesday night in mid-winter they were to play bottom club Huyton, the laughing stock of rugby league. Just seven hundred and twenty-one people turned up to watch. Some years later when Hull had reawoken from their slumber and were back at the top of the league, an entrepreneurial bright spark had the idea of printing a t-shirt. A simple white shirt with a simple message on the front. 'I was one of the 721.' He sold fifteen thousand."

Ian C. tells this yarn in relation to a Sex Pistols gig in Huddersfield that "Every punk rocker in the north of England who was born between 1959 and 1963 will tell you that they were at ..."
The book is a sort of autobiography set to music, all kinds of music. In the words of Val Wilmer it's "a music-powered helter-skelter of living and learning, as perceptive as a Bob Dylan lyric and as earthy as a Bessie Smith blues."
Quite so.
Posted by Jemmy Hope at 3:34 pm No comments:

All the fuss about helicopters; the Taliban have none and they're winning. Whenever an unpopular military adventure turns into a fiasco the military start to blame the politicians. The politicians deny that they are at fault, thereby implying that the military aren't up to the job.
I've mentioned before that in this country we have a tradition that the military keeps out of politics. Turkey, Indonesia, Argentina, El Salvador - they're the countries with politicised, overbemedalled, military buffoons.

Agyness Deyn.
Posted by Jemmy Hope at 2:39 pm No comments:

Labels: Ministry of Silly Names, Who's who - and why?

Britain's foreign minister? I've never heard of him. Why isn't he telling the Israelis that they should stop the land grab?
Posted by Jemmy Hope at 8:42 pm No comments:

"I'm an arsehole, not a racist," declares Mark Cavendish.

A few days ago I posted a piece about collusion between the Murdoch mob, the police, and the judiciary in covering up crimes committed by Murdoch minions and their associates. This has since disappeared. I thought at first I'd been got at, but then I remembered an unsuccessful attempt to link to an article by 'Obsolete' on the same subject, so I probably pressed a wrong key while faffing about.
Being a technomoron I'm having a fair amount of trouble these days. I've recently been getting messages that if I don't update the internet explorer software al-Qa'ida will get me, something along those lines. So dutifully I uploaded the new IE, then stared in wonder at row upon row of pictograms that covered half of my monitor screen. I clicked on one toolbar to hide it, and thereby lost all contact with my music library.
Being one who learns by his mistakes I immediately consigned the IE crap to technological limbo and resumed nomal service, minus music library, which I've since managed to recover.

This whole blogging business is a bit of a hit and miss affair for me. Anyone visiting this blog will note its spartan appearance, the minimalism of the bewildered. However visitors are not a problem if the statistics of Technorati are to be believed. I stand at number 1,648,968 in their Hit Parade. But Alexa.com demurs; they assign me to slot number 19,179,827, which seems more credible.
When I kicked off with this project I was going to call it "Talking to Myself", but I decided that someone had surely beaten me to that one. I decided on "Swearing at the Telly" because that's something I do, and this method of letting off steam is in the same vein. "You bloody liar!" I shout at one politician, "Mealy-mouthed bastard!" to another. "They can't hear you", Our Lass informs me, as if a hearing was the object of my abuse.
Now I can carry out the same cathartic exercise by keyboard and not even the Missus and the dog are inconvenienced. Except that, having discovered that swearing is overdone in the blogosphere, I am loath to let go with the strong language. Maybe I should change the name to "Gently Chiding the Telly".
Posted by Jemmy Hope at 1:53 pm No comments:

Just thought I'd mention it.
Posted by Jemmy Hope at 8:50 pm No comments:

"He died doing a job he loved." Oh well, nobody else to blame, everybody's happy.

Everybody knows that the western invaders of Afghanistan can't win. They can carry on killing Afghans and Pakistanis, killing their own soldiery, issuing bullshit progress reports, and recruiting more Taliban, until saner mentalities prevail. Then they will leave a ruined country to the same criminals who were running the show before the invasion.

"Well, I'm not going to point any moral;
I'll leave that for yourself
Maybe you're still walking, you're still talking
You'd like to keep your health.
But every time I read the papers
That old feeling comes on;
We're waist deep in the Big Muddy
And the big fool says to push on."

Pete Seeger
Posted by Jemmy Hope at 8:30 pm No comments:

"Michael Jackson touched a lot of young people in a lot of different ways."
Craig Brown in "Private Eye", after Germaine Greer (or so he claims).
Posted by Jemmy Hope at 4:25 pm No comments:

Judeo-fascists on the offensive.
The organisation LDJ, members of which committed this crime, is banned in Israel and the United States, but is legal in "Douce France".
"In this war books are weapons." (F.D.Roosevelt, 1942)
Posted by Jemmy Hope at 1:44 pm No comments:

Now and again, but not often, one has to accept that all politicians are not self-serving, immoral rodents -

A couple of the students had met Cynthia during her recent visits to Lebanon. When they learned that as a Congresswoman, she had introduced articles of impeachment against Bush, was a consistent anti-war voter during her twelve years in Congress, and that no member in Congress had achieved a more consistent, principled, voting record of issues of civil and human rights, including Palestinian rights, they really connected with the subject of the Freegaza aid boat, the Spirit of Humanity and her travails. “Those supporters of Palestine should not accept a false confession and should stay in Jail if necessary. They are patriots” was a commonly expressed sentiment.

More on immoral rodents - I emailed our Foreign Secretary about this, asking what he was doing to effect the liberation of the British hostages from the Israeli pirates. His minions didn't bother to reply on his behalf, but I can guess that the answer is nothing.
Posted by Jemmy Hope at 8:34 pm No comments:

Tony Blair was sporting a black eye as he accepted an award earlier, after a "gym-related accident".

As pirates attacks become a serious hazard in shipping lanes, Israeli security academy offers special maritime protection class.
Israeli security abilities are well known across the world, and are now extending to international waters as well, with the graduation of the first course of ship security staff who will attempt to protect vessels from pirate attacks.

No kidding! This from the pirates who seized a vessel in international waters earlier this week, kidnapped and illegally detained 21 people, and stole their cargo of medical supplies and building materials.
As the French lady remarked "Quelle chutzpah!" Or, as I'd put it, "You're taking the piss, surely."
Posted by Jemmy Hope at 7:39 pm No comments:

Manchester United* signing Michael Owen; phew, what a relief! Saves Phil Brown throwing money away on another crock like Bullard, paying big wages for them to spend time with their physiotherapist**.
I liked the comment by a United supporter in an email to Sky Sport; if Owen were one of Fergie's racehorses he'd have been shot long ago.

Right, deep breath, no blinking, I'm going for Cadell Evans to be wearing the yellow jersey on the podium on the 26th July.
The die is cast; may God be good to him and keep him upright.

Not that I believe that any deity (which may or may not exist) would take an interest in the Tour and its participants, but it's the old pishrogues creeping back.
Posted by Jemmy Hope at 11:15 am No comments:

OK, Le Tour, a quick review. I've already ruled out Contador and Armstrong (yaaawn!), also Sastre. I have to choose between Cadell Evans and Andy Schleck. I would plump for Schleck, but I read on the Saxobank website that both Andy and brother Frank are described as "polyvalent", which suggests that some farting about as per last year may be on the cards.
The betting is -

I've settled for Saxobank to win the team competition. Astana is favourite but I can't see Contador and Armstrong collaborating productively.

I've never liked predicting winners in anything (superstition, pishrogues) but, on reflection I've decided to make a stand against my own benighted mental processes. After all I wouldn't dream of saying "I only have to name my choice and he's guaranteed to win". How does that differ from "I only have to name my choice and he's doomed"? I'm ascribing to myself some praeternatural power. So I have to purge myself of this arrogance once and for all.
If my chosen rider has a fall and breaks a collar-bone ... Oh Jesus! How will I live with myself. Look out Cadell, Andy, one of you is a marked man. Tomorrow I hand over the black spot.
Posted by Jemmy Hope at 7:39 pm No comments: 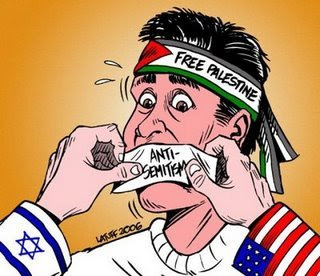 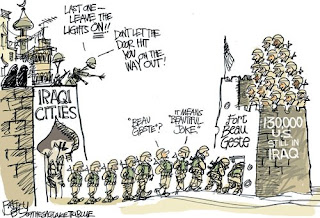 Cartoon time.
The first is by Carlos Latuff
The second by someone whose name I can't read.

Addendum, 2nd July -
Iv'e been informed that the second cartoon is the work of Bagley, of the Salt Lake Tribune.
Posted by Jemmy Hope at 7:15 pm No comments: