Straw to join BNP's Nick Griffin in Question Time debate
(Guardian headline)
I wonder if they'll find anything to disagree about.

'Straw said the BNP were defeated when Labour "fought them hard".' (same article)
and when was that?
They were defeated when anti-fascists took them on, not when politicians said "Both sides are the same."
Posted by Jemmy Hope at 3:02 pm No comments:

News report this morning; pre-nuptial agreements are on the increase. Or pre-nuptual, as one reporter insisted on calling them.
I suppose this means we'll be hearing more of that example of American Moronspeak, 'pre-nup'. It saves learning to spell I suppose, and mispronouncing the whole word. We can add it to celeb, limo, deli, physio, etc. But the one that really sets my teeth on edge can't be pinned on the Yanks - 'spag bol', a definite middle class marker.
So, "Swearing at the Telly"; that's working class in origin, honest! Universal now, of course. I also accept ID for identity, but only with 'card'. That's an old army expression, and so passes muster. ID for 'identification', even for 'identify'; that's a Yankee cop-show cliché, so thumbs down.
Posted by Jemmy Hope at 3:13 pm No comments:

Sandi Toksvig on today's 'News Quiz', "I've got déja vu and amnesia. I keep thinking I'm sure I've forgotten that once before."

I'm assuming that 'Banana Guy' is the bloke who claims that the shape of the banana is proof of intelligent design. If that is so surely all the other non-banana shaped fruits are proof that the deity kept getting it wrong, which contradicts my school catechism's assertion that God is "infinite in all perfections".
Posted by Jemmy Hope at 8:38 pm No comments:

Terry Sanderson, president of the National Secular Society, said yesterday: "This is dismal news indeed. Why Britain should seek to laud such a nasty extremist is beyond me.
"We should not forget that his 'teachings' have resulted in the banning of condoms in countries where HIV is decimating the populations.
"He encourages population growth in places where starvation is common. He persecutes homosexuals, treats women as second-class citizens, has colluded in the large-scale cover-up of child abuse and his church interferes illegitimately in politics and undermines democracy.
"It siphons huge amounts of money out of poverty-stricken economies - what is there to celebrate about such a bigot?
"We will be joining other groups in protesting against the celebration of this ghastly man's presence here."

Amen, Brother.
Posted by Jemmy Hope at 7:33 pm No comments:

So farewell then, Irving Kristol
you lied
and lied
and lied.
Then you died.
Posted by Jemmy Hope at 2:28 pm No comments:

I've just learned of the existence of a religion called Dudeism, promulgated by the Church of the Latter Day Dude. I'm an ardent fan of "The Big Lebowski", and can empathise with the Dude's weltanschauung, but I think I'll remain agnostic, for the time being anyway.
Posted by Jemmy Hope at 8:29 pm No comments:

The BBC again.
Posted by Jemmy Hope at 8:28 pm No comments:

Labels: Bias Bullshit Condescension
WHO ARE THEY? The people who bought the Vera Lynn record and made it a number one hit. I'm 71 years old and I'm too young to remember Ms. Lynn in her heyday. Though she still featured on the radio in the days of my gilded youth, and sold records, she was to me and my coevals a relic of a bygone age. So who are these massed ranks of record buyers? When did they last buy a Vera Lynn record?
Are they the same people who were buying up Beatles records at some or other recent anniversary? Are they the same discriminating samplers of culture who hoovered up the Michael Jackson oeuvre after he slipped off the hook?

I bet they are.
And then there are the book sales. Apparently the biggest selling author in the country is Ms Katie Price, or the person who writes her books for her. Someone else provides plot and text and she provides her name. Who buys them? After buying do they read them? Or is it enough to possess the artefact, like people who never pray, don't believe in much, but have religious images about their living space?
Come to think of it, have the people who bought the Vera Lynn records listened to them?
Posted by Jemmy Hope at 7:51 pm No comments:

"I say to those who reproach me: Do you know how many broken homes that shoe that I threw had entered because of the occupation? How many times it had trodden over the blood of innocent victims? And how many times it had entered homes in which free Iraqi women and their sanctity had been violated? Maybe that shoe was the appropriate response when all values were violated."

Muntazar az-Zaydi
Posted by Jemmy Hope at 7:44 pm No comments:

I've noticed that Roy Keane has started to smile occasionally at press conferences and interviews. He should discontinue this practice at once, it is disturbing, not at all natural. I'm reminded of Daniel O'Connell's description of the smile of Sir Robert "Orange" Peel, "like a silver plate on a coffin".
Posted by Jemmy Hope at 2:22 pm No comments: 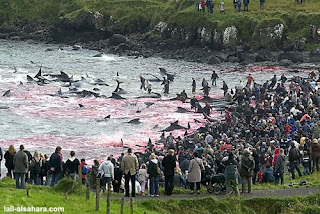 THAT'S ENTERTAINMENT
... in the Faroes. I can't hold it back - BASTARDS!
Posted by Jemmy Hope at 2:58 pm No comments:

"This rewriting of history is spreading Europe's poison." Seumas Milne

"The real meaning of the attempt to equate Nazi genocide with Soviet repression is clearest in the Baltic republics, where collaboration with SS death squads and direct participation in the mass murder of Jews was at its most extreme, and politicians are at pains to turn perpetrators into victims."
Ah! So these are the people whose corner Professor Niall Ferguson is fighting.
And what can Mr. Milne mean by "the ostensibly more liberal Orlando Figes".
Posted by Jemmy Hope at 7:39 pm No comments:

"Recently the NHS brought a yacht and moored it in a Hull marina," he said, adding he thought it was a "completely crazy decision".
"If this extravagance had been published for all to see, the people who made this decision would either have had to justify it or scrap it."

Three points:
NHS Hull, not the NHS, bought the yacht.
The extravagance WAS published for all to see. The people of Hull protested vociferously. Nothing was done.
NHS Hull is a quango, and not answerable to us as voters, as taxpayers, or as the people they probably call "customers".

NHS quangos were set up by Thatcher as a step towards the privatisation of the health service. Cameron has declared his commitment to the National Health Service - don't they all? Any politician who was a genuine supporter of the NHS would set on record the intention to return the NHS to public accountability. Cameron won't do this, nor will Brown, or any of the others who fancy their chances as next leader of the Labour (sic) Party. The NHS is not safe in the hands of any politician or party.

Meanwhile Dave - does he still prefer the familiar form, or was that a passing phase? - has accepted a £1 million donation to his party from a certain David Rowland, UK citizen, non-UK taxpayer, non-UK resident (officially). This patriot is worried about "the economic future of Britain", or to put it another way, the possibility of "non-domiciles" having to pay UK tax. I think he has ensured that they won't under a Cameron-led government.
Posted by Jemmy Hope at 4:49 pm No comments:

"The BNP's core support is derived from people who think the entire nation is under the control of a vast conspiracy against the honest people of Britain."
Sunny Hurndal

Well I believe that, but I don't support the BNP. I would perhaps exchange the word "vast" for "powerful". Capitalists conspire to exploit the working class.

"But the BBC is giving space to an organisation that itself is anti-democratic, authoritarian and averse to our liberal democratic traditions. It seeks to destroy the very basis of the nation it claims it's trying to protect. Why shouldn't it be treated with less support and respect than the other political parties?"

No surprise there then. I take it that "It seeks to destroy the very basis of the nation it claims it's trying to protect" refers to the BNP and not the BBC, though in my opinion it needn't. I've said it before, whenever the British Nazi movement is raising its profile the BBC is on hand to provide some free publicity.
Posted by Jemmy Hope at 7:39 pm No comments:

Labels: Bias Bullshit Condescension
I'm pleased to note that the Chevalier Wogan is allowing his wig to grow old gracefully. It is gradually turning grey.
The English knight has announced his retirement from the BBC2 morning job. I dread it when these giants of self-promotion "retire". I know that, like Slimy Parky and pompous old Trevor McDo, they are going to appear everywhere - in adverts, in newspaper columns, in bookstores and in one-off TV specials. At least pre-retirement they are corralled somewhere where we can avoid them. Once they are returned to the wild they can prey upon us at will.
Posted by Jemmy Hope at 2:19 pm No comments:

Samuel Johnson referred, disparagingly, to this in his dictionary definition for oats: "A grain, which in England is generally given to horses, but in Scotland supports the people." His biographer, James Boswell, noted that Lord Elibank was said by Sir Walter Scott to have retorted, "Yes, and where else will you see such horses and such men?"

Tomorrow is the 300th anniversary of the birth of Samuel Johnson, a man who, by his own account, stank. The above quotation is lifted from wikipedia. Johnson's crack about oats and the Scots is often quoted; the noble lord's retort tends to be ignored, as it takes the shine off Johnson's putdown. Several remarks by Johnson antipathetic to the Scots are on record.
One might reply to Elibank's query with the single word "Ireland". After all, that nation's bloodstock is the most highly rated, and it has furnished more canon fodder for empire builders than even the Scots. But leave that aside, and savour a remark that deflates prejudice, albeit witty, with further wit. It has to be stated in Johnson's favour that he confessed that he always quitted Elibank's company a wiser man.
Johnson's stupid claim that the Highland Gaels had no real language, but communicated by means of a series of grunts, rather places his much vaunted erudition in perspective. That particular example of his ignorance served him in good stead when he challenged James MacPherson to produce the original copy of his Ossian "translations". Johnson was right, there was no original, the "translations" were MacPherson's own work. But his challenge was based on his own ignorance. He believed that no book had ever been written in the Gaelic language.
The Scottish Gaeltacht* held plenty of manuscripts, produced by learned families, though few were in bound book form. However such books did exist, so it was only a matter of luck that Johnson was able to succeed with his challenge based on a misconception.

Of the two frauds my preference is for "Ossian" MacPherson over the smelly doctor.

*Or "Gaidhealtachd"
Posted by Jemmy Hope at 10:39 am No comments:

15 Horrifying Reasons to Never Let Anyone You Love Near a McDonald's
Posted by Jemmy Hope at 11:15 am No comments: