... and today is International Translation Day. I learned this fact from a book by Eduardo Galeano which was translated into English by Mark Fried.
Vladimir Nabokov wrote that "The clumsiest literal translation is a thousand times more useful than the prettiest paraphrase", and he may be right. Personally, in the case of poetry in translation I like to have the literal AND the pretty paraphrase. Nabokov should have known something about translation. He did write some of his works in German originally, then took responsibility for producing the English language versions of the same works.
He also translated the Russian epic "Prince Igor" into English. I read it many years ago, and now can't remember a thing about it.
I suppose that the international auxiliary language, Esperanto, has too many powerful enemies to be considered as a solution to the problem of international communications, spoken or written. Enemies in the tradition of Hitler and Stalin who saw Esperanto is a threat to their ambitions of world domination. Today it is not necessary to imprison Esperantists and burn their books. Who reads books when there is the lobotomy box? How much Esperanto is heard on the airwaves? I can't recall when I last heard the E-word on radio or on TV.
I still think that one day, when all communication is oral, the world's population will converse in a form of pidgin English.
"... l'avenir m'épouvante", words from the tattooed bodies of French convicts in Cayenne. Somebody's going to have to translate that.
Posted by Jemmy Hope at 12:39 pm No comments:

Today is "European Day of Languages", which I've never heard of before. Apparently its purpose is to encourage the learning of languages other than one's own. I heard of this on the radio this morning ,from a newsreader who went on to pronounce the term laissez-faire as "lassez-faire".
Well, I've never been one to miss the opportunity to throw some exotica into the mix. So here are some examples of less well known European languages. The English version will come at the end, in case the meaning isn't clear already.

All human beings are born free and equal in dignity and rights.
They are endowed with reason and conscience and should act towards one another in a spirit of brotherhood.

Most of the above is lifted from the www.lexilogos.com website, a language website with French and English versions. Dictionaries for many languages, plus useful phrases, proverbs, poems, songs, are all to be found there.

Posted by Jemmy Hope at 2:09 pm No comments:

BONO EXPOSED AS A COMPLETE FRAUD

Some people take a little longer to catch on. Interesting rogues' gallery though.

Posted by Jemmy Hope at 8:36 pm No comments:

Having time for little else at the moment I post a poem by Austin Clarke about some famous Irishwomen.

THE SUBJECTION OF WOMEN

Over the hills the loose clouds rambled
From rock to gully where goat or ram
Might shelter. Below, the battering-ram
Broke in more cottages. Hope was gone
Until the legendary Maud Gonne,
for whom a poet lingered, sighed,
Drove out of mist upon a side-car,
Led back the homeless to broken fence,
Potato plot, their one defence,
And there, despite the threat of Peelers,
With risky shovel, barrow, peeling
Their coats off, eager young men
Jumped over bog-drain, stone to mend or
Restore the walls of clay; the police
Taking down names without a lease.
O she confronted the evictors
In Donegal, our victory.
When she was old and I was quickened
By syllables, I met her. Quickens
Stirred leafily in Glenmalure
Where story of Tudor battle had lured me.
I looked with wonder at the sheen
Of her golden eyes as though the Sidhe
Had sent a flame-woman up from ground
Where danger went, carbines were grounded.

Old now, by luck, I try to count
Those years. I never saw the Countess
Markievicz in her green uniform,
Cock-feathered slouched hat, her Fianna form
Fours. Form the railings of Dublin slums,
On the ricketty stairs the ragged slumped
At night. She knew what their poverty meant
In dirty laneway, tenement,
And fought for new conditions, welfare
When all was cruel, all unfair.
With speeches, raging as strong liquor,
Our big employers, bad Catholics,
Incited by Martin Murphy, waged
War on the poor and unwaged them.
Hundreds of earners were batoned, benighted,
When power and capital united.
Soon Connolly founded the Citizen Army
And taught the workers to drill, to arm.
Half-starving children were brought by ship
To Liverpool from lock-out, hardship.
"innocent souls are seized by kidnappers,
And proselytisers. Send back our kids!"
Religion guffed.
The Countess colled
With death at sandbags in the College
Of Surgeons. How many did she shoot
When she kicked off her satin shoes?

Women rose out after the Rebellion
When smoke of buildings hid the churchbells,
Helena Maloney, Louie Bennett
Unioned the women workers bent
At sewing machines in the by-rooms
Of Dublin, with little money to buy
A meal, dress-makers, milliners,
Tired hands in factories.

Mill-girls
In Lancashire were organized,
Employers forced to recognize them:
This was the cause of Eva Gore-Booth,
Who spoke on platform, at polling-booth
In the campaign for Women's Suffrage,
That put our double-beds in a rage,
Disturbed the candle-lighted tonsure.
Here Mrs. Sheehy-Skeffington
And other marched. On a May day
In the Phoenix Park, I watched, amazed,
A lovely woman speak in public
While crowding fellows from office, public
House, jeered. I heard that sweet voice ring
And saw the gleam of wedding ring
As she denounced political craft,
Tall, proud as Mary Wollenstonecraft.
Still discontented, our country prays
To private enterprise. Few praise
Now Dr. Kathleen Lynn, who founded
A hospital for sick babies, foundlings,
Saved them with lay hands. How could we
Look down on infants, prattling, cooing,
When wealth had emptied so many cradles?
Better than ours, her simple Credo.

Women, who cast off all we want,
Are now despised, their names unwanted,
For patriots in party statement
And act make worse our Ill-fare State.
The soul is profit. Money claims us.
Heroes are valuable clay.

Posted by Jemmy Hope at 8:59 pm No comments: 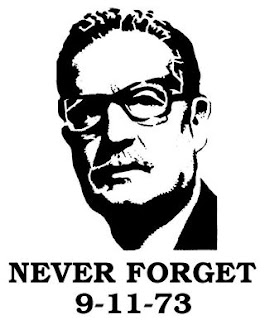 "When a team from the BBC Panorama programme visited Chile in November 1973, staff at the British embassy secured them 'maximum co-operation from the junta'.
"The embassy was optimistic about the slant of the documentary, which included interviews with members of the Anglo-Chilean business community speaking approvingly about the coup. A British embassy official wrote: 'The balance of the programme should be 60 to 75% favourable to the new regime.' The embassy was not so pleased with a World in Action Granada TV team that arrived at the same time. The same official wrote: 'I gathered that the WIA producer … came to cover torture and shootings … Granada's activities were certainly known to the junta whose press secretary told me that they had been seeing 'things they should not see'.' An FCO official back in London scrawled on the letter: 'Ominous news about the World in Action film'."
(Guardian)

Posted by Jemmy Hope at 9:07 pm No comments:

“Nothing will ever be given for free. This shows that it happens when we fight.”
Posted by Jemmy Hope at 7:56 pm 4 comments:

I'm having a clearout at the moment, old books, old newspapers. I came across a Guardian film and music section and wondered why I kept it. I opened it and read this article on the French New Wave. I'm guessing that it's why I held on to the paper. Joe Q. enthuses about some of my favourite films here, and so I quote -

A Bout de Souffle was an influential film, though Joe Q's hindsight opinion of it as "dull and sophomoric is not far off the mark. I would add pretentious. And yet there is one (at least) saving grace, the pairing of Jean-Paul Belmondo and Jean Seberg - perfection.

Posted by Jemmy Hope at 7:48 pm No comments:

Posted by Jemmy Hope at 2:53 pm No comments: