No knighthoods, honorary or otherwise, for these folks.

Posted by Jemmy Hope at 1:45 pm No comments:

Last week the death was announced of María del Rosario Cayetana Alfonsa Victoria Eugenia Francisca Fitz-James Stuart y Silva, 18th Duchess of Alba. Now in addition to the Dukedom of Alba this lady held four other Dukedoms, including the Berwick title of the Fitzjames. Then there were the 18 condados (countships) amongst a muliplicity of titles of nobility and grandeza.
Now the original Dukedom of Alba was held by a family called Álvarez, then passed by marriage to a family named Silva, then to Fitz-James Stuart. This hoovering up of titles by means of marital alliances seems to be particularly common in Spain. Some systems of nobility don't allow titles to pass through a female line. The Alba example of titles sticking together like flies on flypaper suggests to me the possibility that one day, in the distant future all Spanish titles of nobility might be invested in one individual staggering under the weight of a redundancy of noblesse.
My interest in the Irish diaspora once brought to my attention a Spanish gent styled the Conde de Morphy, anglicised as Count Morphy. He was the grandson of an Irishman named Murphy and was ennobled by reason of a post as secretary to the then Queen of Spain.
The count died sine prole, that is, childless. So did the title die with him as it surely would have in Britain? No, it passed by some means to an Irish niece, and as far as I know is extant. The last named holder of the title that I found had one of those multiple surnames, all Spanish, favoured by the hidalguía. This individual was probably completely deficient of the Murphy gene, but the Condado de Morphy lives on.

I also underestimated the number of titles that became attached to her person. There is a fuller list on Wikipedia
Posted by Jemmy Hope at 8:52 pm No comments:

Labels: Zionist Heroes
"... the Queen mother famously stated that she would have been happy for the Nazis to invade the UK, as long as they kept the Royal family."
God bless yer, Ma'am (tugs forelock).

The contrasting fates of Alan Turing and Lord Sempill
Posted by Jemmy Hope at 8:11 pm No comments: 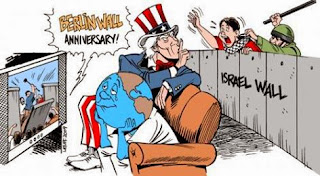 (Carlos Latuff)
Posted by Jemmy Hope at 8:30 pm No comments: