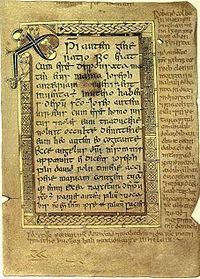 The Book of Deer is a ninth century work created by the monks of Deer Abbey in Aberdeenshire. It is written mainly in Latin, the language of religion and of learning.
There are, however, some passages in the book of a secular nature written in the Gaelic language, the vernacular of Scotland north of the Forth and Clyde at the time. The image above shows Latin and Gaelic on the same page.
My interest in the Gaelic texts stems from my resentment of the English author Samuel Johnson, on account of his arrogant dismissal of Highland culture and his refusal to accept the possibility of the existence of written works in Gaelic.
The Book of Deer is a Latin work, admittedly, but the presence in its pages of written Gaelic notes signals the Highland Gaels' capability of producing a work in their mother tongue.
Other works were written and bound in book form at a much later date, but they were in existence at the time of Johnson's claim that no book in Gaelic could be produced for his inspection. Unfortunately, no one attempted to call his bluff, and it was a bluff. 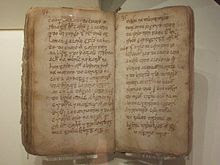 Johnson's refusal to recognise a Highland culture and, admittedly sparse, literary output was a result of his antipathy towards the Scottish author, James Macpherson.
MacPherson had published a work, a bestseller, called Ossian, which he claimed was a translation of an old literary work in Gaelic written by an ancient bard named Ossian. Ossian was translated into other European languages and influenced many continental authors, including Johann von Goethe. It is credited with giving birth to the romantic movement in the arts.
Now none of this sat well with the English for several reasons, not least political. Since the suppression of Jacobitism, Gaelic was portrayed as the language of benighted savages, Highlanders and Irish Gaels. Johnson himself had claimed that the Scottish Gaels had no real language, but communicated in a series of grunts. A Gaelic literary revival, with an attendant lifting of the morale of the downtrodden Gaels was not something that the political class of the United Kingdom was prepared to countenance.
Fortunately Literary yes-men like the Tory Johnson were happy to go on the attack for King and Country.
MacPherson's claims were investigated and his weak spot was uncovered - the fabulous ancient book. There was no book.
MacPherson had toured the Highland collecting ancient poems, songs and stories that had been passed down orally for hundreds of years. There were also manuscripts to be pored over, but most of the written material was fairly recent. No ancient books or manuscripts were found, or were there to be found. "Produce the book!" was Johnson's cry, and the only weapon in his possession. But it was enough to finish MacPherson, who became known as "the forger".
Meanwhile elsewhere, the book was a roaring success and none of the controversy surrounding its origin had any effect. Ossian, in its Italian translation was said to be Napoleon's bedside reading.

It did have an effect on educated Irishmen and Scots to whom the stories told in Ossian had a familiar ring. They had heard of Ossian (Oisín), Oscar, and Fingal (Fionn Mac Cumhaill). Darthula was their Deirdre of the Sorrows, Temora, was the residence of High Kings, Tara, or Teamhra.
They believed that the verses and songs passed down to them were corrupted versions of the original Ossian, which must therefore exist. They went in search of the book and failed to find it. But they did discover a wealth of material, and initiated a study of the language, literature, history and traditions of old Gaeldom that led eventually to what became known as the Gaelic Revival. From this cultural nationalism sprang the political nationalism that led to a bilingual Irish Republic, and the continuing campaign for Scottish independence.
Posted by Jemmy Hope at 4:15 pm 3 comments: