The following article is the work of my friend Mary Scully, whose trenchant opinions I'm always happy to reproduce.

Politicians from around the world gathered in Israel today to lay wreaths at the grave of Ariel Sharon & eulogize him for virtues he did not possess. Even his allies knew he was bereft of any saving grace. Eulogies for lowlife criminals of high status don’t really challenge the art of invention since they just keep recycling the same old eulogy about what a great leader the deceased was. What else do you do when a guy’s biography reads more like a criminal rap sheet!? It’s Sharon’s policies toward Gaza that most typify his political character & those are worth taking a look at before the Zionist myth-making machine moves into action & he comes out fumigated from the stench of his crimes.

Eulogists herald his removal of about 10,000 Zionist settlers from Gaza in 2005 as a peace policy. They’re not just grasping at straws to praise him; selling that narrative is an important part of Israel’s war strategy against Gaza. Despite the political opposition by settlers who felt entitled to move onto Palestinian lands & expropriate them & the hysterical chorus of right-wing Israelis who want all-out war with Palestinians, Sharon did not intend the disengagement from Gaza to be a gesture of peace. It’s purpose was to remove Israelis from harm’s way so the economic blockade & aerial bombardments of Gaza could proceed with impunity. The settlers simply moved to Zionist settlements in the West Bank to continue their plunder.

The chief justification Israel uses for its murderous bombing sieges which target civilians & destroy infrastructure (like power plants, hospitals, schools, housing) is that Palestinian armed groups in Gaza under the political leadership of Hamas are bombarding southern Israel with thousands of rockets & mortars. Since Israel has embargoed so many materials (everything from pharmaceuticals to cement) these missiles are necessarily homemade & cannot be aimed with any reliability; nor are they a match for Israel’s vaunted Iron Dome system which can pick them off midair.

Israel claims thousands of these things are detonated in Gaza every year but there is scarcely a shred of evidence of any kind. Allegations galore but scarcely any hard evidence. Meanwhile there is an avalanche of photojournalistic documentation for Israel’s destruction in Gaza. To get around the glaring discrepancy, media sources like Fox News claim Hamas choreographs gory scenes, stages fake deaths & scenes of severely injured people “right in front of international TV crews,” & releases images from other conflicts (like in Iraq & Syria) to pass off as Gazan civilians killed by Israeli bombs. (It’s getting harder to distinguish Fox from the National Inquirer & Globe except that the latter two are more reliable.) That still doesn’t answer why Israel can’t produce any proof of rocket bombardment.

Israel puts on a great spectacle of red alert sirens to warn Israelis of pending rockets but these do more to psychologically traumatize the population than any fatalities or property damage from rockets coming in from Gaza. Over the past several years, there are about 25 deaths attributed (without proof) to rockets from Gaza; there have been hundreds of documentable deaths in Gaza from the blockade & repeated carpet bombings.

The Goldstone Report, authorized in 2009 by the UN, said outright it was unable to document rocket attacks from Gaza since Israel refused to cooperate with the investigation & would not provide access to the Israeli sites & victims. The primary sources used in the Goldstone Report for their allegations were Human Rights Watch (HRW) & Amnesty International, along with some Israeli groups.

If those sources seem unimpeachable, think again. HRW pulls the political stunt of “a plague on both your houses” in chastising both Hamas & Israel for violations of international laws governing war--as if there was military parity between a homemade arsenal & the most advanced weaponry systems in the world. Contrary to UN & HRW mythology there is no courteous or genteel way to conduct war. War crimes are the hallmark of modern war. And when one of the combatants is waging a war of ethnic cleansing, those being erased from human history have a right to fight with whatever means necessary to defend themselves, with or without the imprimatur of HRW or the UN.

There may be a few rockets coming in from Gaza. Maybe even undoubtedly. Rocket fire that cannot be directed at military facilities & may strike civilians is a damn foolish military method & even more foolish political method when it’s the equivalent of slingshots against drone aircraft. Hamas has long-since recognized that & claims it Americans didn’t stop with Hiroshima; the Japanese weren’t surrendering fast enough so they hit Nagasaki too.” He went on to say Israel should force Gaza to capitulate by cutting off all supplies. “There should be no electricity in Gaza, no gasoline or moving vehicles, nothing. Then they’d really call for a ceasefire. Were this to happen, the images from Gaza might be unpleasant – but victory would be swift, & the lives of our soldiers & civilians spared.” And that is the legacy of Ariel Sharon: genocide & ethnic cleansing reduced to ‘unpleasant images’.

Photo is Ahmed Zayed, an 18-year-old fisherman standing in the rubble of what used to be his home in Gaza which was destroyed in Israel’s 8-day bombing siege (November 2012) called Operation Pillar of Defense. Young Zayed’s dream is “to live in peace & go to college.” 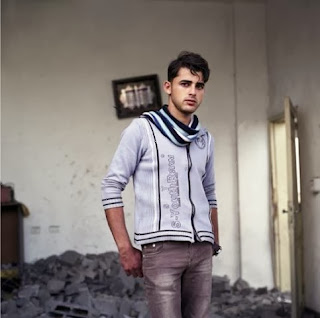