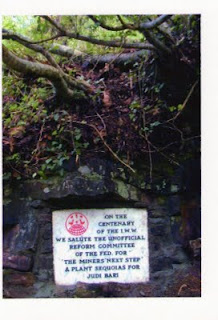 A fellow worker who visited these pages for a look at the 'red card' posting also read the piece on Thomas Aitkenhead (May 20th, below) and left a comment which I reproduce here. This is in order to show the stone referred to, and to gloss a couple of references.

The sheer improbability that God spent millions of years making some marble in Carrara and delivered it for free to Carmarthen just in time for inscribing and mounting in the rock in Pembrey, to be unveiled on the IWW Centenary Day is amazing enough.
And then on the eve of the unveiling, that improbability is capped by the impossibility of a local Carmarthen Councillor, on being told of the next day unveiling of the Carrara Marble, having been to Carrara tells us that "Carrara is the only town in the world that ever had an Anarchist controlled Town Council". Everyone agrees that is an impossibility. Compounded Improbability with an Impossibility!!! The existence of the IWW centennial marble in Pembrey must be a miracle and so prove that God exists. It also proves that God is a fully paid up member of the IWW, and that God is an Anarchist.
Always let the Catholic Workers table at Anarchist and IWW events.

Fellow Worker Judi Bari, whose name appears on the commemorative stone, was a victim of the FBI terrorist organisation called Cointelpro, who planted a bomb under her car. She and her passenger, FW Darryl Cherney, survived the attentat, but were accused of transporting the bomb in her car, contrary to all the evidence. The victims sued the FBI and the local (Oakland, California) cops and won $4 million in damages. But in the meantime Judi had died.
Like my correspondent I have a soft spot for the Catholic Worker movement, whose main enemy seems to be Holy Mother the Church. Some US Catholics have campaigned for the canonisation of Dorothy Day, a leading Catholic Worker. I predict that the Vatican will canonise Adolf Hitler before they raise Ms. Day to the communion of saints.
The town of Carrara in Italy is famous for its marble and its anarchists.
Posted by Jemmy Hope at 8:04 pm

Doesn't seem to be much on wiki for Judi. IWW has a better bio at http://www.iww.org/en/culture/biography/BariObit1.shtml

Agree about Dorothy and the Church. The hierarchy haven't taken kindly to her.

I'm currently reading some Catholic liberation theologians which the Congregation for the Doctrine of the Faith aren't mad over either.

Yes, much more information. I'd never looked at that article. There's also www.judibari.org