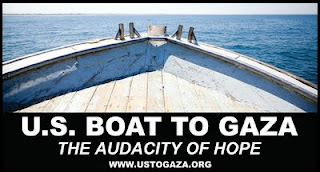 "Six Members of Congress have written to Secretary of State Clinton, urging her to do "everything in her power" to work to ensure the safety of the U.S. citizens on board the U.S. Boat to Gaza, The Audacity of Hope."

"... we do not believe that the flotilla is a necessary or useful effort to try to assist the people of Gaza. Just this week, the Israeli Government approved a significant commitment to housing in Gaza. There will be construction materials entering Gaza and we think that it’s not helpful for there to be flotillas that try to provoke actions by entering into Israeli waters and creating a situation in which the Israelis have the right to defend themselves." (US Secretary of State Hillary Clinton)

Translation: Don't worry about a few dead bleeding hearts, let's have a massacre on the high seas.
Posted by Jemmy Hope at 3:32 pm

Your response to my last post was very boring. Try and do better, please.

Cynthia McKinney is from GA. She was an embarassment. Even her own constituents eventually tired of her boorish and crazy behavior. She and her dad are considered clowns, even by the congressional black caucas and other such natural allies.
But dont believe me. Im sure you and TGIA, from your perches far, far away, know better. :)

It's pretty funny Jemmy. Your pal, and my sworn enemy, tgia, has banned my posts over at Mondoweiss.

In the words of Tom Cruise's character in A Few Good Men, sort of, "he can't handle the truth!". LOL

It was a little frustrating at first. Then i came to my senses. It was a huge waste of my time. Although mostly posting on economic and financial issues, I still came under constant personal attack for being stupid, ignorant, all the usual nutbagger rants and rages.

Anyhoo, the vast majority or America continues to be either completely unconcerned with the I/P situation, or on the side of Israel. This I know from direct personal experience. Challenge me if you like. It means nothing. You and your buddy don't know anything about the USA beyond what comes from folks who share your we hate America attitude.

I predict Mondoweiss will not be around too much longer. It's struggling to raise a mere $10k from it's subscribers. Rather pathetic for a "leading" blog on the subject.

"Can't handle the truth"? Or, is tired of shovelling manure?